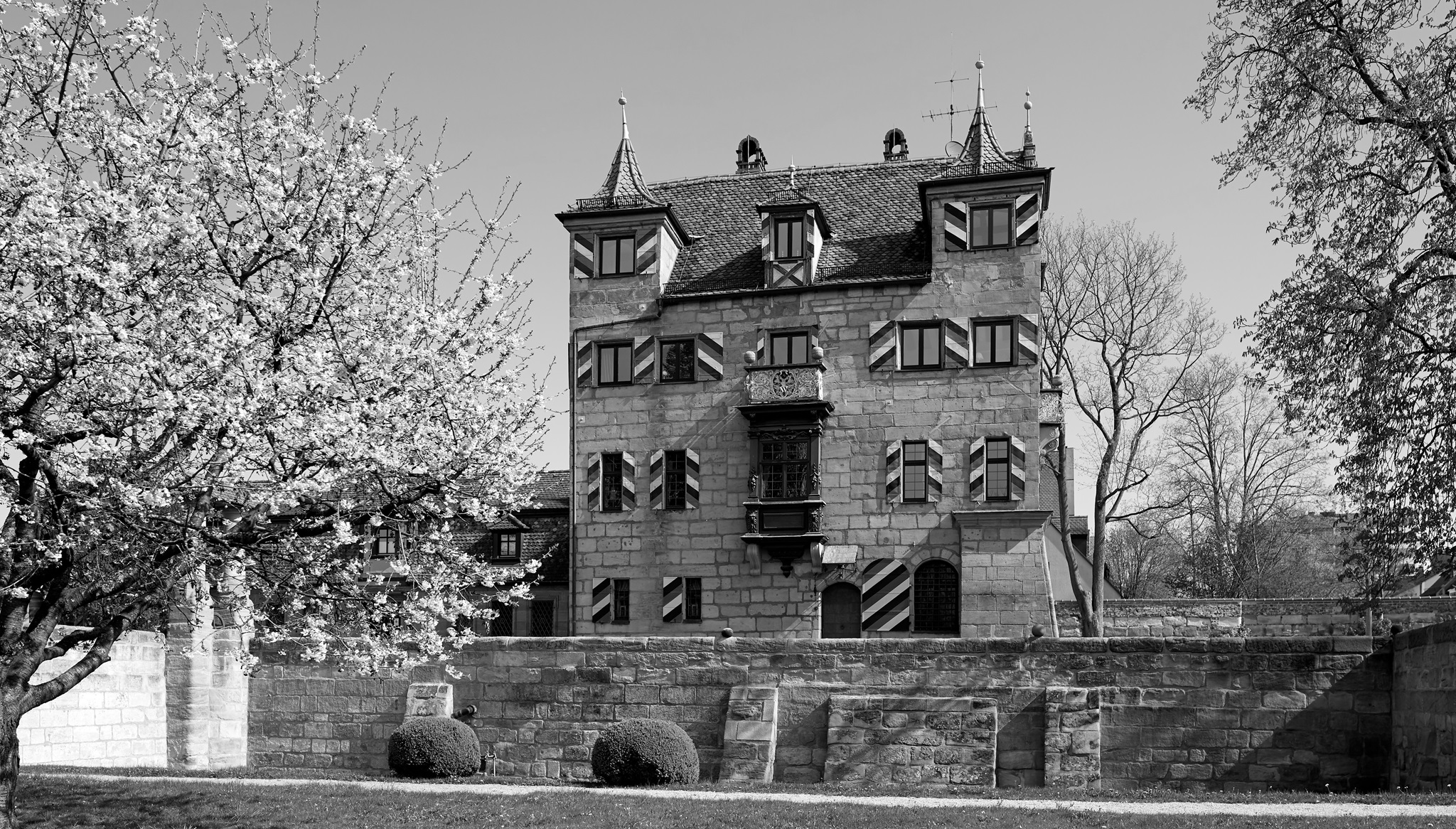 The Nuremberg district of Schoppershof derives its name from the Schopper family, which first appears in records in 1267.   In 1308, Bigenot Ebner sold Götz Schopper several acres outside of the Laufer Gate, which were in the fiefdom of the Marshals of Biberach (= Papenheim).  Presumably, the so-called “Schoppershof” Palace was built on this property, which remained in the fiefdom of the Pappenheimer family into the sixteenth century, not long after the purchase. In fact, Götz Schoppers son Fritz received the “Waldrecht” (the right to harvest wood) in the Imperial forest surrounding the house from Kaiser Karl IV in 1356, when the structure was still referred to as the “Durrenhof.”  In the same year, the estate was renamed the “Schoppershof,” but was still referred to by its old name for a long time afterwards.

In 1370, Fritz Schoppers sons Heinrich, Christian, and Jakob and Fritz applied to the Imperial City of Nuremberg for a so-called “Öffnungsrecht” (the right of a liege or territorial lord in the Holy Roman Empire to have free use of a vassal’s castle or fortified house in the event of war or feud) for the “house at Durrenhof, called ‘Schübelspühel.’ ”   At that time, therefore, there was already a fortified structure (implied already, indeed by the term “house” used in 1356) in Schoppershof. The old place name “Durrenhof” (not to be confused with Dürrenhof, near Gleißhammer) does not, therefore, necessarily refer to unfruitful, sandy soil (the German word “Dürre” means “drought” or “aridity”), but perhaps rather referred to a “Thurn” (a fortified tower) as was the clearly case in Dörnhof.

In the middle of the fifteenth century, the Schoppershof was in the possession of the bothers Hans and Christian Deichsler, to whose sons Hans and Berthold the fiefdom of the Schoppershof (including the “hoch Haus” (“tower building”) and the gardens, the brick lodge, and other appurtenances) was granted by Marshal Heinrich von Pappenheim in 1453.  This description of the house further implies a medieval tower structure.  However, the first Schoppershof was burned down at the beginning of the first Margrave War in 1449.  Accordingly, Hieronymus Kreß, who received the fiefdom of the estate from Berthold Deichsler for 1,100 guilders in 1468, received for his payment only a “Burghaus” (a castle ruin) “which one calls a tower building.”

In 1497, the sons Anton and Hans Kreß were again granted the fiefdom of the tower, garden, brick lodge, etc. However, the report of the survey of the landscape in 1504, before the outbreak of the War of Succession, omits any mention of the Schoppershof estate.

At the sale of the Schoppershof in January 1531 by Antons sons Georg and Christoph Kreß, the attendant garden was specifically referred to as a “Burgstall” (a castle ruin) within which a small manor house and a summerhouse were located.  The purchaser was the well-to-do merchant and trader Bonaventura Furtenbach, who this time did not immediately resell the estate for a profit, but rather retained it for a longer period, and dissolved the fiefdom of the Pappenheimers.  Thus it was that he was forced to accept that his Schoppershof was burned to the ground by the Nurembergers during the Second Margrave War, on May 17, 1552, in order to prevent the enemy from using it to establish a tactical military base on the city outskirts.  Furtenback took steps to rebuild the manor house and stables as soon as 1557, and in March of that year he received  270 trees from the Imperial forest for this project. In 1558, the rebuilding of the barn and longhouse followed.

The renovated estate of Bonaventura von Furtenbach, newly ennobled by the Kaiser, was a typical example of a Nurmberg “Weiherhaus” (a fortified house with a moat) consisting of large living quarters in the tower, which was fortified by a moat lined on both sides by ashlar masonry.   The four corner towers also date from this reconstruction. Not long afterwards, in 1561, however, the owner sold the palace, along with the Thumenberg estate to the wealthy goldsmith Jacob Hofmann, who died in 1564. Hofmann’s heirs sold Schoppershof in 1569 to Georg Gößwein.  He, in turn, planned an addition to the house in the winter of 1569/70, the building of which about nothing is known.  A further building project was rejected in 1572.  In 1582, the estate was left to Gößwein’s brother Carl, who ran into financial troubles in 1588 and who was forced to sell the estate in 1589, after declaring bankruptcy, to Bartholomäus Viatis for 8,500 guilders.

Viatis was born in Venice, and came to Nuremberg as a twelve-year-old apprentice, where he amassed a fortune after a lucrative marriage and the founding of a trading firm. In 1590 Viatis not only renewed the “Öffnungsrecht” and the obligation to sell the estate only to citizens of Nuremberg, but immediately began structural improvements as well.   First to be renovated were the apartment for gardeners, the so-called “baking house,” and the apartment for the palace builders. In addition, Viatis planned to turn the existing gardens into a large “pleasure garden.” By 1594 he had already spent 4,000 guilders on renovations.  In 1599 applied for permission to build a round stair tower onto the exterior of the house, which would reach each floor.  The removal of the old stairway in the main tower would expand the existing living quarters, which already extended over three full stories and a partially finished attic.  It is possible that the stairway gable dates from this period of construction.

Because Viatis was annoyed that the cellar was too small and too damp, several attempts were apparently made to reconstruct the cellar.   However, water from the moat continued to seep in.  In 1614, a completely new cellar including an insulating layer of clay was installed.   In 1617, the lord of the castle ran into problems with the imperial city administration after he had a tower in an outer wall erected without permission.

By 1622, Martin Peller, the son-in-law of Bartholomäus Viatis the Elder, who had died at an advanced age in 1624, was managing the palace.  In 1642, his son Tobias Peller took on both his and his brothers’ shares of the inheritance.  Since his sons had no male heirs, they sold Schopperhof in 1710 to their cousins from the Christoph Peller family line.  These cousins entailed the estate to the oldest family heir.  Afterwards almost no further construction was undertaken, except for the addition of a fireplace by Christoph Peller in 1671, and a small chancel in the nineteenth century.

Christoph Gottfried Peller III led the family foundation until his death on October 30, 1795.  Under his care, a one-story, sandstone block addition with a mansard roof was erected on the north side. The estate management then fell to his oldest son, Carl Christoph Alexander until the dissolution of the entailment through legislation in Bavaria in 1808.

Only after Christoph Friedrich Wilhelm Peller, the last male of the line to bear the name Peller, died of serious wounds received in the Franco-Prussion war, did the Peller heirs sell the manor to the Barons von Tucher, who own the estate to this day.  The structure of the room and their appointments have remained largely unchanged since the beginning of the seventeenth century.  The one-story “Ökonomiehof” has also been preserved.   Waterspouts in the fortifications were added in the twentieth century.  A southwest corner tower was destroyed during the second world war, early in 1945.  The once impressive and large gardens are only partially extant today–large areas of the garden and sections of the garden walls, as well as garden buildings were sacrificed for housing construction in the second half of the twentieth century.