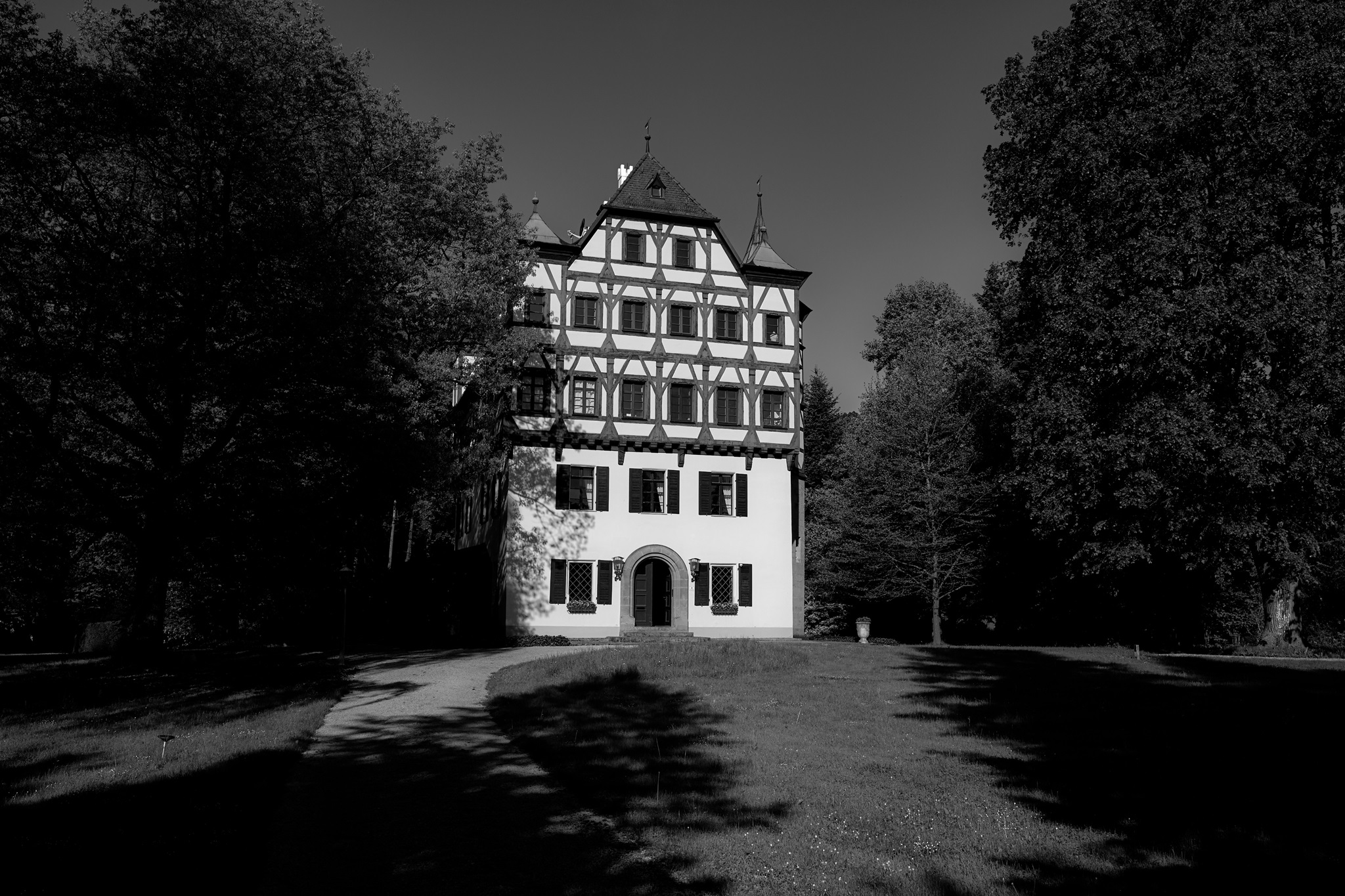 The Simmelsdorf Tucher palace reflected at one point the stereotypical ideal of a moated castle: the main tower house lay in the middle of a moat, which only gave way to a landscaped garden in the nineteenth century.  The date of construction is not known.  Gustav Voit names a Dietrich von Wildenstein III as lord of the manor, who in 1350 used the income from a Simmelsdorf manor to endow his name day at the Michelfeld Cloister, and who is not named again afterwards.  However, there is no concrete evidence to support this conjecture.   A first clue appears in 1352, when a certain Ulrich Neidung called himself “von Simmelsdorf.”  In 1360, he and his brother Fritz transferred the manor estate, along with Heinrich von Wildenstein XI’s Rothenburg Castle to Kaiser Karl IV, and were therefore in 1366/1368 indicated as being as serfs of the Bohemian Crown.  The Neidung family, who named themselves after various castles according to their places of service, are also to be found among Nuremberg citizens and mining companies in the region (see Diepoltsdorf I, Hiltpoltstein, Winterstein).

At some point after 1368 the Türriegel von Riegelstein family came into possession of the Simmelsdorf estate by unknown means, perhaps through marriage.  At any rate, in 1379, the castellan of the Rothenburg castle, Dietrich Türriegel, was in charge of other estates held by the Neidung family.  In 1417, Heinrich Türriegel IV received the fiefdom of the Simmelsdorf from King Sigmund.  In 1430, his brother George received permission from the King to use his wife’s dowry as a security for his Simmelsorf fiefdom. Whether or not this report referred to this estate is unclear, since afterwards Simmelsdorf appears in records as a fief of the Bohemian crown, for example in 1454 as a fiefdom to Werner Türriegel from King Ladislaus of Bohemia.

An analysis of tree rings carried out in 1990 determined that the wooden construction of the moated castle, which rests on limestone foundation, was completely replaced between 1445 and 1455.    This could have at least partially been a refurbishment after damages inflicted in war, since an account by the Nuremberg Military Captain Erhart Schürstab reports that his mercenaries also burned down the village of Simmelsdorf in 1450.  Whether or not the castle, though protected by its moat, was affected by this fire, is not known.

In 1500, the brothers Heinrich, Hans, and Conz Türriegel distributed the settlement of the estate between themselves.   Extensive debts soon forced Hans and Conz to sell their shares of the estate.  Sixt von Seckendorff received a half share from his brother-in-law Conz Türriegel in 1504.  The record of sale dated March 15, 1504 shows for the first time a well-fortified compound with towers, a bailey, moats, and gatehouses.  In 1506, Seckendorff took over the remaining half share of Hans Türriegel who died tragically in 1504 as one of the defenders of the Kufstein Fort, who were condemned to death by sword by Kaiser Maxilian after their capture.

The Simmelsdorf palace then remained in the possession of the Seckendorffs for several decades: in 1517, Caspar followed his father Sixt, Bailiff for the  Margrave of Schönberg, and in 1523, Caspar’s brother Lorenz followed.  Lorenz’s descendants Hans and Georg von Seckendorff left substantial debts, forcing their both of their widows, daughters of Conz Türriegel III, to sell their halves of the estate to Werner Türriegel II, the Conservator of the Hartenstein Administration, in 1570 and 1572, respectively.   Again it was debts which forced Georg Michael Türriegel who had inherited Simmelsdorf as part of a distribution of an estate, to begin purchase negotiations with the Tucher family.   Only in 1598, after protracted and at times violent disputes with the Rotherburg family “Ganerbschaft” (a community of family joint-ownership in which co-heirs only held property rights in common) which even led to the imprisonment of the Türriegels and a brief occupation of the castle, was the Tucher family able to purchase the Simmelsdorf estate for the Dr. Lorenz Tucher Foundation. However, the Electoral Palatinate, who held the right to grant the fiefdom to the Rothenburgs, objected, further delaying the Tuchers from taking possession.  They were only allowed to take possession after Elector Friedrich von der Pfalz IV acknowledged the Tuchers as Territorial Lords and after they pledged themselves as land-owning subjects of the Palatinate.  In February of 1607, the castle, which was by then in dire need of repairs, was given over to the administrators of the foundation.   Under the leadership of Endres Tucher IV (1551-1630), the estate was renovated beginning early in 1607.

Although the Dr. Lorenz Tucher Foundation continued to take care of the maintenance of the castle, after 1830 it nevertheless lost its medieval appearance, which is documented in an etching from approximately 1677 (not 1650), presumably after a template by Johann Keill (1642-1719).   First the moats were drained and filled in order to construct a landscaped garden in the English style in the middle of the nineteenth century.  The Tucher family employed none other than Carl Eduard von Pezold (1815-1891) to design the garden.  Pezold was the first pupil of Prince Hermann von Pückler-Muskau, who had created two of the world’s largest landscaped gardens in Bad Muskau and Branitz. Pezold himself took over the further development of the park in Bad Muskau as Director of the Gardens, and numbers among the most illustrious landscape architects dedicated to English gardening style in Europe.  These landscaping measures at Simmelsdorf saw the removal of the wooden bridge constructs, some of which were covered, and some of which served as drawbridges, connecting the bailey (which was on an island itself) and the manor house.

In 1845/48, the manor house itself was altered.   The renovation was reportedly based on plans made by the former Nuremberg Building Inspector Leonhard Schmidtner (1799-1873) who since 1837/38 had become the Inspector of civil building projects in Passau and Landshut, and added the four prominent corner towers as well as an eight-sided, historically-influenced stairway tower on the north-west side.  The timberwork for the corner towers reputedly came from the abandoned Rothenberg fortress.  During this time, all the easily-reusable building materials (roof tiles and gutters, ceiling and roof beams, etc.) from the fort had been sold.  The castle compound in Simmelsdorf is still owned by the Dr. Lorenz Tucher Foundation today.